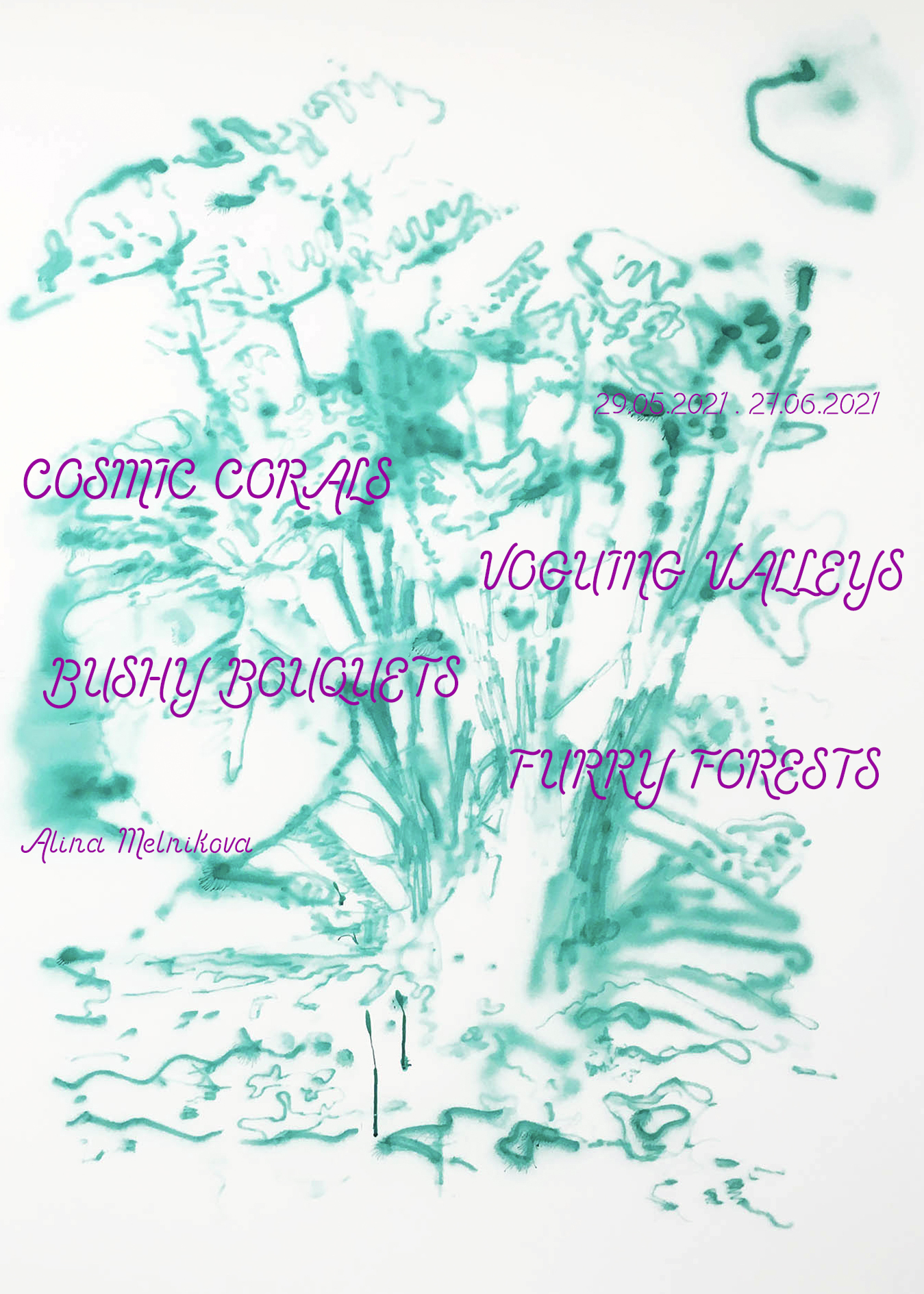 ESPAI SOUVENIR in collaboration with The Rooster Gallery invites you to a solo show “Cosmic Corals, Voguing Valleys,  Bushy Bouquets, Furry Forests” by Alina Melnikova. A fecund wonder-space composed of new ceramic pieces and flatwork weaved together by artist and curated by Gabriel Virgilio Luciani.

From May 30th to June 27th open by appointment: espai.souvenir@gmail.com

when the indeterminate absorbs , when the magical beyond wraps around …

“Indeterminacy is not a lack, a loss, but an affirmation, a celebration of the plentitude of nothingness.”

Drifting in, drifting around…these sly objects and materials are beyond what they seem. To seem is so literal, to be(felt) is so poetical…*lush laughter*, at our petty assessments of them. These corals are cosmic. They are the beyond, the unknowable forests, the unthinkable contortions and configurations that are performed by the overlooked and the unassuming. Their colours mutate, their fingers transform over time, they are subject to —as all things are— a uniting potentiality; to become is the mother we all share. These feral, fertile creatures and characters are pieces of an overwhelming nexus of possibility, affect, sentience and transience: they will be what they weren’t, they affect and are affected, they feel and receive, and they are in constant motion forwards, never ceasing to advance.

Again, this is what we have in common: all of us bushy bouquets, evolving exceptions, funky anomalies that change-forward and feel. This seeming (again, seeming is so literal) fantasy world proposed by Alina Melnikova isn’t so much a “fantasy” world (understood traditionally) at all, but a translation/tranportation of dynamics between the urban and rural, the fierce and the soft, the odd and the familiar…a stunning magical realist’s perspective on the diversity of our world and its symbiotic, mirroring, echoing systems. We need each other, we need the friction. Magic here is not an esoteric phenomenon, but an ancient folklore describing transformative, causal, dialectical and frictional systems that change and are changed, feel and are felt; a reciprocal, concatenating web of looping causality (I cause , you cause , we cause together …). We see this reflective system in this exhibition. Haven’t you seen or felt something that looks like this work? A tree? A branch? A necklace? A figure? A fold? A bend? A towards? An inside? A beyond?

Magic is fusion, friction, a becoming-something we weren’t because of something else. What happens to domestic plants featured in an urban party? Maybe the plants take on a new dimension under the neon lights. What happens to the characters who see them? Maybe they go home and decide to paint and sculpt…and the web goes on. These exchange dynamics are fundamental to symbiosis and affectivity: what happens because of something else happening. So again, this exhibition is no fantasy but a shimmering reality that coexists with(in) our own. A fecund feel-space that really exists in every way possible. This differs from the Western landscape tradition that dominated visual culture from the 15th-20th Century: Alina is not generating a portal —a representation of…to—, but a magical actuality that exists within the frictional happenstances between the diverse array of things that exist: squirrels, violins, sand, hooves, sidewalks, street lights, adornments, milk, rain, vessels, nothingness.—(these greens never looked so foreign , didn’t they ?)—Indeterminate, ambiguous creatures ferment between and beyond the many corners of existence.

This is where ambiguity and mystery and magic enter the spiritual realm…where fantasy isn’t imagined, but redefined. Which is more a tree? The thing with leaves and bark, or Alina’s magical translation/transportation of a tree? If we redefine generously what fantasy is, neither is more or less real. Breaking down reductionist semiotics is difficult, but through dreaming, through magic we can get there. Playing is magic, touching is magic, creating is magic, dialoguing is magic, carrying is magic, collaboration is magic, familiarity (the you in me , the me in us) is magic, indeterminacy (the beautiful, empty unknown) is magic. Pull…push…reach

The project is kindly supported by the Lithuanian Culture Council